And the top reason why it cost 1.8 million for 6 Facebook pages *Drumroll*

10. Because each e-mail sent and received cost the agency 50 sen

If I had to go through all of the above, I’d freaking charge 2 million… per page! But for my dear readers, I’ll do it for RM59.95… interested?

If you checked any two or more of the above, then you can now display your allegiance to the wired way of living by sporting internet-themed basketball shoes. 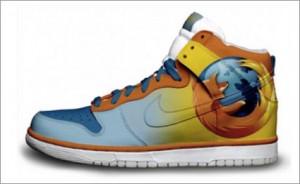 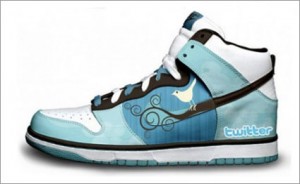 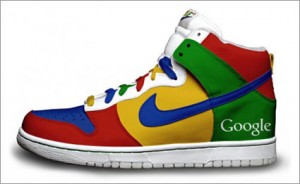 These shoes are a perfect complement to your style; which probably includes nerdy glasses, a transformers t-shirt and an unwashed for months denim. What’s more? The shoes’ built-in geo-location technology will also let your friends know about your whereabouts every step of the way. (You know I’m taking a piss right?)

In case you’re wondering… these shoes were designed by a certain Brass Monki (the name says it all ain’t it?) and not by Nike (phew!).

I’m going to log-off and have a life right now.

I feel I have the best job in the world… sometimes. Most other times, I feel I’d rather use what meagre savings I have to buy a push cart and start selling a variety of nuts at a night market.

Working in advertising is a love-hate relationship. At times, it feels that I am on top of the world, looking down at number-crunching, corporate rats struggling in their long sleeves and heels under the burning sun. Most times, I feel the only real perk of working in this industry is the part where I only need to be attired jeans and t-shirts.

But that’s the nature of the business isn’t it? While I may not absolutely love every moment; I can’t think of doing anything else either. And after being a copywriter for 12 years *gasp*; here are some commemorative observations, unofficial facts and anecdotes:

We Malaysians are generally a predictable lot. But the latest Zeitgeist Report – a run-down on most popular search terms – unveiled by Goggle for 2010 did spring some surprises. Apparently Proton Inspira is more popular than oh-so-creepy Justin Bieber and Rajinikanth’s Endhiran (a Tamil movie) is more popular than Leo’s Inception.

Here are other interesting tid-bits on what Malaysians searched on Google this past year:

The full list – plus tool to dig deeper and compare data – is viewable at Google Zeitgeist. And don’t forget to watch Zeitgeist 2010: Year in Review video too, man how time flies!

Is ‘No’ such a bad word? Very much so it seems. A ‘No’ is more often than not taken as an outright rejection, a negative response or even the mark of a lazy ass. A ‘No’ is denial of service, frowned upon in business and something you never say to your boss or clients or parents or teacher or spouse. If fact, it’s a big ‘No-no’ to say ‘No’ to pretty much anyone you come into contact with; it’s considered rude, obnoxious and self-serving. I wonder why the word even exists since it’s so disliked.

Please forgive me if you feel that I am rambling, but is it really not-so-nice to say ‘No’? Are there instances where a ‘No’ can be a good thing? There sure are:

When trying to quit

Saying ‘No’ should be an addict’s mantra. Be it a recovering alcoholic or a credit card totting shop-a-holic; saying ‘No’ keeps them clean. A ‘Yes’ in this instance could ruin lives and destroy families, to say the least.

When pressured to choose

We’ve all gone through this. A friend whom we look up to, that tries to lead us into temptation. Be it that guy who gave us our first smoke, or the dude we shared a joint with; saying a simple ‘No’ was all it needed.

When quality needs to be maintained

If saying ‘yes’ means quality has to suffer, then you might as well say ‘No’. When there is a bottleneck tensions rise, nerves fray and minds clouds. When there’s just too much to do, it is respectable to say ‘No’. You may lose a few bucks, but you gain a glowing reputation.

And how does all this relate to advertising you ask? Absolutely nothing, yes, that’s right NO-thing.

Could a piece of advertising communication really kill? I am not interested in ads that have made a killing in the creative circle or anything like that. I’m thinking about ads that could really land someone in ICU or worse, 6 feet deep.

Yes, I am talking about ads that can literally kill. We all know how bad advertising can be sometimes: misleading, over-promising, irrelevant, annoying, irritating, in-your-face, and the list goes on. But those kinds of ads can be easily ignored, and wouldn’t cause more than an inconvenience.

Excuse my morbidity, but I have been fascinated by this subject matter for quite a while now. Simply because I am quite certain that the act of creating ads can be seriously injurious to health, to the extent of being fatal. Surely many of those who make ads have given their lives to the rumble and tumble of the industry, and continue to do so to this very day.

If an ad can kill the makers, it should be able to take down an audience or two. Could someone – while taking in the aesthetic beauty of an ad, made by the very people who literally give up their lives for it – actually meet their maker?

I think I have found an answer in this wonderful billboard for Wonderbra:

You see, it’s a 3D billboard that depicts a very ecstatic model decked out in a Wonderbra . The thing is, if you put on a pair of 3D glasses and view the billboard, it actually accentuates the model’s boobs. I must give the guys who created this visually pleasing billboard the thumbs up… well done!

But then they go and place this billboard at a busy intersection in central London. Now, all it needs is some idiot to drive pass, clumsily trying to put on a pair of 3D glasses, and then crash into oncoming traffic. The full effect will indeed be experienced.

The title of this post is actually the name of the video from YouTube that I’ve posted for your viewing pleasure. The video is actually a parody of a movie called A Few Good Men, starring Tom Cruise, Jack Nicholson and Demi Moore among others. I must say it is one of the few good (pun intended) Tom Cruise movies, back when he was very watchable.

If you’ve not watched the video yet, I suggest you do. Or if you’ve seen it before, just view it again to refresh your memory. The video pokes fun at the daily battle between creatives and suits. As funny as it is, the insights offered are very valid indeed. Here are some of the key learnings from the video:

Just in case you are wondering, I have nothing against the AEs, AMs and ADs of the world. They do a very difficult job which requires tons of humility, patience and persistence. If I were an AE, quite a number of clients would have mysteriously vanished from the face of the earth.

I wonder what would happen if we show this video to every aspiring ad man or woman out there.

You know, the fresh out of Kementerian Pendidikan Malaysia greenhorns whom are contemplating a communications design course. The college freshmen who think advertising is all about getting to work at noon, writing a couple of headlines and scooting off to lunch. And the 25-year old executive who’s unsure about his career and thinking of advertising to get his juices (creative or otherwise) flowing.

The video is actually a parody of a Monster recruitment ad, created to promote the ADDY Advertising awards based in the States. I liked the idea of using kids to ‘sell’ the advertising industry, because kids tell the truth. At least kids who have yet to accurately identify right from wrong. The kids in the video however have laid bare all the symptoms of an industry that’s tired, unforgiving and complicated.

Now, would I have jumped into the deep, dark ravine of advertising had I seen this video as an undergraduate? Hell yeah! I wouldn’t trade where I am now for anything else. Granted, things could be better, but it’s stuff like this that makes advertising… well… advertising. It’s a love/hate thing… few understand, many falter and for some of us it’s a way of life.